I know I have not posted in a while but I am compelled to post this consumer warning. Being the gadget hound that I am I pre-ordered Blackberry Storm from Verizon. 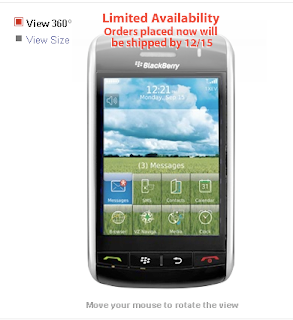 I was so excited to have something on the Verizon network that compared to the iPhone... (Help me I am trapped on Verizon!!!)
I eagerly awaited this phone and read many positive and some even glowing reviews about this amazing new device. LIES ALL LIES!!! These guys must be getting paid off to give this thing positive reviews.. the only decent feature on this phone is the camera and even that takes about 5 seconds to snap a pic. I think they must have been slipped some sort of hallucinogens and given iPhones to review. This is the only explanation for such positive reviews. It it is the worst phone I have ever had (and I have had a lot of terrible phones) The touch screen with a click that they all rave about is a joke. You have to push so hard it hurts after a few minutes of typing. The internet browser is terrible and almost every function on the phone is sluggish to respond. Don't even get me started on how bad the typing is... in portrait mode the only way to type is "sure type" which is terrible enough on a non qwerty phone much less the absolutely inaccurate screen of the Storm. I could go on and on about feature after worthless feature, but thankfully Verizon has a return policy and this worthless piece of junk is going back on Tuesday! For all of you waiting in line for a Storm... stop... step away from the hype...I want my Curve back... truthfully I just want an iPhone... :-( Verizon, what were you thinking when you turned down Apple's initial offer to distribute their technical work of art?

BTW I tested myself typing this post on the Storm... gave up after about an hour and collapsed into a sobbing heap clutching my beautiful iPod Touch and praying it would magically turn into it's cooler sibling that also makes phone calls... All you iPhone owners out there just hold your dear one close tonight and be glad that you are not trapped in phone hell like me...
Posted by Ken at 11:11 AM

Sympathy please...for all of us...

This post made me laugh so much. I am disappointed with the fact that they created a blackberry that not very many people like. Sad. :( I hope you get an iPhone.....soon. :)

So sorry - makes me glad I gave into AT&T and made the switch instead of waiting for this.... almost did.

I had to go to Verizon the day that thing came out, and i heard the employees complaining about it, which made me laugh because ten feet away there was a line of people ordering them because that location had sold out. I got a dare that day, and I must say that I'm content...

And the 3G iPhone is the best. I love almost everything about it. I do wish it would allow you to attach a photo to an SMS message but I'll wait until they add that. In the meantime I can at least email pictures I take quite easily.

I love how right next to your glowing review is a automatically generated Google ad for the Storm. Apparently Google isn't THAT smart.

I laughed so hard at this...sorry Ken. One day you will have the gloriousness (not a word) that is the iPhone 3G. I had a chance to play with one and agree that it's a total piece of crap. I hope John Krasinski got paid a lot of cash for his VO and didn't accept payment in... "all the free BlackBerry Storms you want."

Ken - I will let you touch my iPhone on the weekends I direct. You can hold from 3-7pm on Saturday and 8:30am to 1pm on Sunday. Perhaps this will help until you can get your own iPhone :)

I too was thinking of going that new amazing device, after picking one up at the store I quickly was unimpressed. Glad to see that you agree. Hopefully you took it back, and hopefully the I-phone will be available for Verizon some day.